The Remarkable Story of Mrs. S. and the Incredible Prof. Dr. Bertagnoli

In 2016 after contacting several surgeons in the US and Germany and being turned down for treatment, Mrs. S (58 years old) contacted Prof. Dr. Bertagnoli’s office. At this time she was barely able to stand and could only take a few steps because of her extreme back pain. Prof. Dr. Bertagnoli agreed to take her as a patient. Treatment, if any, would be based on further testing.

With strong family support Mrs. S, who was in a wheelchair, her husband and daughter made the trip to Germany. Her general medical condition was not ideal. Much dorsal scar tissue was accumulated from two previous spine surgeries, and a galectomy and hysterectomy added ventral scar tissue. She had high blood pressure, a previous DVT and high blood sugar levels. She was obese, making any ventral procedure difficult. She had osteoporosis with T-score of -3. However, what made her situation worse, were the two inappropriate surgeries she received earlier in the United States. Both of these surgeries were dorsal spine fusion without cages but with bone grafts, best known as posterior fixations. These surgeries involved the implantation of eight pedicle screws and bone grafts at three levels and two titanium rods at l3-l6. (Patient had a junctional l6 vertebra). With continued degeneration of her discs and the weight she was carrying, the dorsal fusions never fused and the titanium rods were constantly bending (albeit at the micro level) and being under stress eventually broke within four years.

Sadly one of previous spine surgeries in the US also resulted in an amputation of the left hand, due to an infection she obtained through many IV attempts.

Although she had contacted many surgeons in the US and German none would help her. She was finally introduced to Prof. Dr. Bertagnoli, who decided to take the case.

An EMG in Germany revealed no denervation. This meant that spine surgery had the possibility of helping Mrs. S. No significant heart conditions was revealed by an EKG and echocardiogram. This meant that her heart would survive the surgery. However, there was one more test to be done. Prof. Dr. Bertagnoli’s examination of the patient's MRI gave him some concerns about the l34 disc. So he performed a discography. The result was negative and an OR plan could be completed.

1. perform an ALIF at l45 and at l56. This is to rebalance the load on the spine and replace already degenerated discs.
2. remove all previous dorsal instrument (screws and the broken rod and bone grafts). Removal of the existing and broken instrumentation was necessary to implant the new system.
3. remove all troublesome osteophytes (anterior and dorsal decompression). This was to remove all possible pressure on the nerves and nerve roots.
4. strengthen her vertebra with injections of bone ceramics. This was due to her osteoporosis.
5. implant slightly larger screws and new rods and new grafts. To re-establish stability and maintain decompression of the radicular nerves and nerve roots.

On July 5th, early into the surgery difficulty with the mobilization a venous structure close and anterior to the l45 disc forced a move to plan B, which was a PLIF at this level. All other aspects of the surgery were executed according to original plan. Total surgical time was 11 hours. 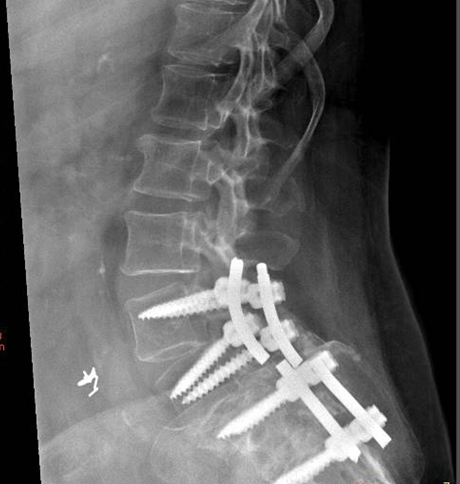 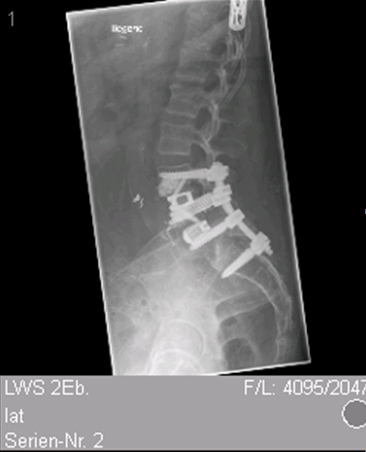 Today the patient is walking and carrying on a normal life and now that she is doing more weight-bearing activity, the expectation is that her osteoporosis will improve.